From:   “Chris Edwards” This email address is being protected from spambots. You need JavaScript enabled to view it.
Sent:   November 02, 2002
Attach:   Aramaic writing. jpg
Subject:   Evidence of Jesus name in Aramaic

I thought after reading some email posted on your site that I would help Adam out a little bit here... You wrote:

This fake information then becomes the basis for your fake conclusion i.e.  'And we do know how Yeshua name was spelt.'
Your false premises led you to a false conclusion. You do not have an Aramaic Gospel of Matthew and therefore you do not have source material for how Jesus would have spelled his name in Aramaic.

I am not going to into the subject of the Gospel of Matthew in Aramaic. (At least not at this time) I have attached a photo though that shows the name of Jesus in Aramaic. This is the photo of James the brother of Jesus ossuary, this is the inscription that is wrote on it. This is substantial proof of the Lords name in Aramaic. This has been dated to be about 2000 years old as well. Most scholars agree that this does belong to James the brother of Jesus. Oh and I do have a question for you. Can you please explain the following verse to me?

Matthew 26:6  Now when Jesus was in Bethany, in the house of Simon the leper...

Give this one some thought and come up with a good answer. Now I am not going to go as far as some SN and say that you have to use the SN in order to be saved. I will say that the Aramaic name for Christ (Yeshua) is just as valid of a name to use as Jesus is. Both equal Salvation. For did you know that the Koreans pronounce his name Yesus. And because they do this are they in error? God forbid, God knows the heart of those that seek him. Oh the Chinese pronounce it almost the same way, the point here is that there are many different tongues in this world. And while I believe that we should try to honor as closely as possible  the true name of Christ, he will accept us all the same if we are seeking him with our hearts to worship him, whether that be Jesus, Yeshua, Yesus or whatever. So please answer my question as to the regards of the verse that I provided. 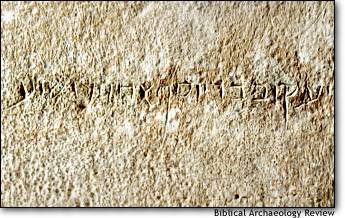 Hello Chris,
Thanks for the note. I appreciate the information on the name of Jesus in Aramaic. Certainly the ossuary recently found in the hands of a collector in Jerusalem is of interest to all who know the Lord as Savior. It is of special interest to those who make claims about the original and correct name of the Savior.
While you seem to have no compunction in assuring me that the ossuary in question was used to hold the bones of "James the Lord's brother" spoken of in the Scriptures. Other sacred name advocates are getting in line to deny it that same position.
The difference of course is this. Those who find that the words on the ossuary agree with their chosen spelling of the "Hebrew" name of Jesus are saying it is the biblical James' burial box. Those who refuse to accept the common spelling of his name used during the time period in which our Lord lived - the spelling used on the ossuary - reject the ossuary as not the burial box of the Lord's brother.
Most sacred name people use Yahshua as the correct rendering into English of the Lord's name. In recent years, the last five or six, the rendering Yahushua has gained in popularity. Since there is no way to get Yahshua [or Yahushua] out of the Aramaic spelling found on the ossuary, most of the movement's adherents will reject the writing and the box on which it is found. Otherwise, they would have to once again change their foundation doctrine - the pronunciation of his name.
I believe, but neither I nor anyone can offer any scriptural proof, that Jesus used the Aramaic spelling of his name that was in common use by other men of the same name in that time period - the spelling found on the ossuary. Research evidence for this is presented on our web site www.sacrednamemovement.com in the essay about whether the name of Jesus is in any way connected with the name Zeus.
The ossuary is not Scripture. But if it can be proven to be a first century artifact, it is just one more piece of evidence of how first century Jewish men named Jesus spelled their name.
Your information that "Most scholars agree that this does belong to James the brother of Jesus." is erroneous. A few scholars have said it is. A few have said it is not. A few have said it is too early to tell. A few have said that because of the history of the ossuary's ownership in the last few years, they cannot tell its authenticity. But most scholars have not yet publicly expressed an opinion one way or the other. So, I guess the jury is still out.
As to the verse you ask about, it indicates that while Jesus was teaching in Jerusalem during the last days before his death, he spent some time at the house of a man called Simon the leper.
I certainly agree with you that the Aramaic name of our Lord - commonly pronounced Yeshua - is "as valid" as the name Jesus. This is also the spelling and pronunciation of modern Hebrew used by Jewish people today. I think it is fine for them to call him by this name.
If you have any interest in standing by Adam's positive statement that there was an Aramaic [or Hebrew?] Gospel of Matthew found at Qumran, please present any evidence you may have. Or would you say that Adam just mis-spoke himself?
Peace to you and to your house.
Gary Mink